N13 is Palmers Green, and is largely an Edwardian district which architectural historian Nikolaus Pevsner describes as a poor man’s Muswell Hill.

We start our walk at Palmers Green Post Office, 364 Green Lanes which is almost opposite Fox Lane.

Turn right out of the Post Office and walk along Green Lanes. Keep going past the cross roads (Bourne Hill on your left, Hedge Lane on your right. Take the first left and then take the first right. Stop number 1 is the first house.

This fairly modest house is where the poet and writer Stevie Smith lived almost all her life. 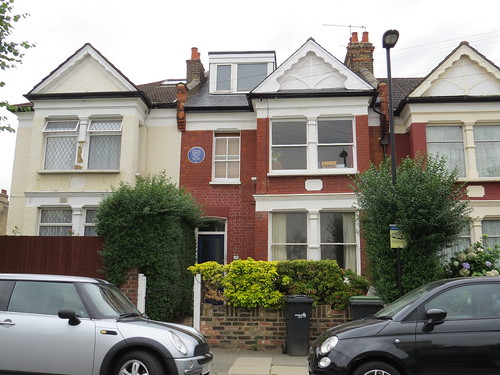 And here is the only Blue plaque I could find in N13. 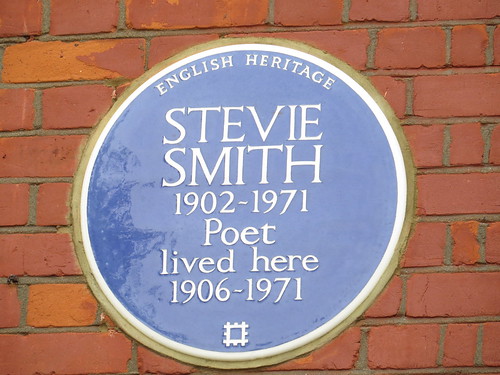 Florence Margaret Smith was born in Hull in 1902. Her family called her “Peggy”, but she got the name “Stevie” as a young woman when she was riding in the park with a friend who said that she reminded him of the jockey Steve Donaghue.

In 1906, she moved with her mother and sister here to Palmers Green and she lived in this house until her death in 1971. When her mother became ill, her aunt Madge Spear came to live with them and in effect brought up the children. Smith called her “The Lion Aunt”.

Stevie Smith wrote three novels but is best known for her poetry, in particular “Not Waving but Drowning” – published in 1957, it is a twelve line account of a man who drowns but people on shore think he is just waving. But it ends by suggesting he was always misunderstood:

“I was much too far out all my life And not waving but drowning.”

There was a play called Stevie written about her life by Hugh Whitemore in 1977 which became a film a couple of years later with Glenda Jackson as Stevie.

Now retrace your steps to Green Lanes and then just by the big cross roads you will see St Monica’s church on the right. Our next stop is the church hall which is also used as a theatre.

This building opened in 1931 as St Monica’s Church Hall. It was converted to be a theatre in 1935 and housed a repertory company for many years. Roger Moore worked here after the war and David Bowie performed a mime act here in March 1968. 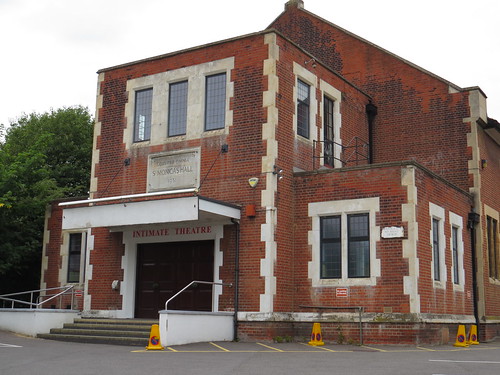 It is no longer used exclusively for theatrical performances, but it is used by amateur dramatic companies and still has the name Intimate Theatre above the door as you can see. 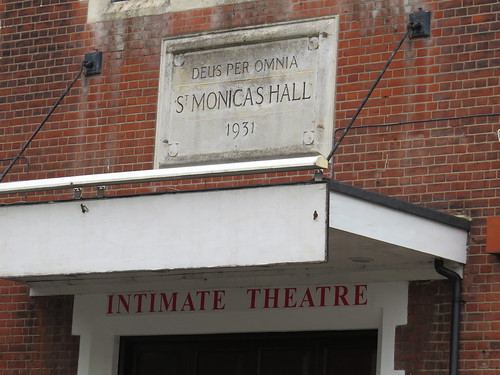 By the by, St Monica is quite an unusual dedication for a church.  She was an early Christian saint who is remembered for putting up with her husband’s adultery and for her prayerful life dedicated to the reformation of her son, for whom she is supposed to have wept every night. Not surprisingly, she is the patron saint of difficult marriages and disappointing children.

Continue walking along Green Lanes and take the right turn opposite the Post Office. Our next stop is immediately on the right.

This little street is called Pellipar Close and houses a modern building called Skinners Court which replaced the Skinners Almshouses dating from the 1890. 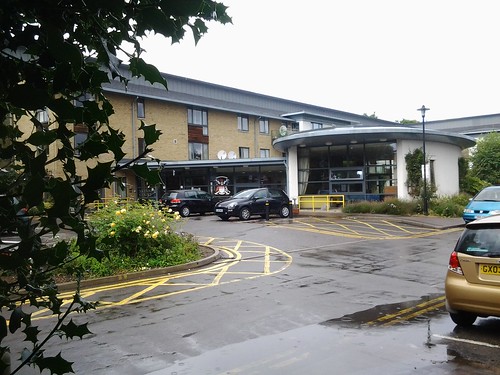 You can see the Skinners coat of arms on the entrance. 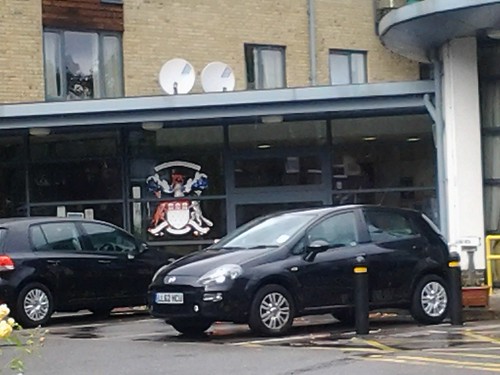 This is course is one of the livery companies in the City of London. In fact it is one of the so called Great Twelve. An order of precedence was set in 1515 which established the seniority of the companies and determined the order they process at formal occasions.

And in case you are wondering about the street name “Pellipar”. It derives from a medieval name for workers who prepared animal skins for clothing etc.

Now return to Green Lane and turn right. Our next stop is a little way along on the left. 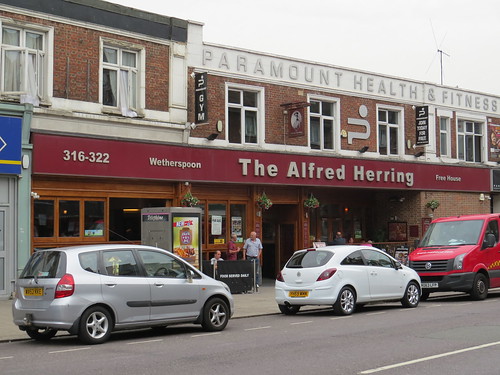 This Wetherspoon pub is named after Alfred Herring VC. Second Lieutenant Herring was awarded the Victoria Cross for his heroic actions in France, on 20 March 1918. He later became a Major and after the war became a Chartered Accountant.

He was born in Tottenham but the connection to Palmers Green is that when he was called up by the army in 1916, he was living at the family home, 143 Fox Lane, just around the corner from this pub.

Continue along Green Lanes. Our next stop is just a little further along on the left.

Today there is a non descript shop and office building at 292 Green Lanes but this was the site of a cinema which originally went by the delicious name Palmadium. Not a name for dyslexics! 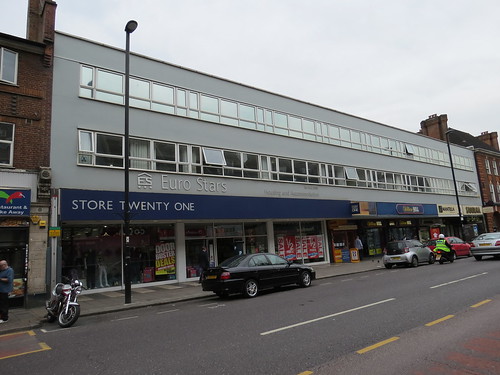 The Palmadium Cinema was an independent cinema opened in December 1920. It was part of a complex which included a billiard hall and shops. It was taken over by Gaumont in April 1928 but only renamed as a Gaumont in February 1951. It finally closed in February 1961. The building was demolished and a Tesco supermarket was built on the site. This has since closed and a disparate array of shops has taken its place.

There was also another cinema just a little further along Green Lanes called the Queen’s Hall. It first opened in November 1912 but was extended in 1923 when a balcony was added. It was never part of a large chain until 1967 when it was bought by the Star Cinemas chain based in Leeds. They only ran the Queen’s Hall Cinema for a short time closing it in September 1967. It was briefly a bingo club, but this did not last long either. The building was demolished in February 1971. A supermarket was built on the site. This later became a Marks & Spencer’s Simply Food shop and is now a little Waitrose.

Continue walking along Green Lanes until the junction with Aldermans Hill. Our next stop is just across the road at this junction.

Now here we have a fairly recent addition to the Palmers Green street scene. 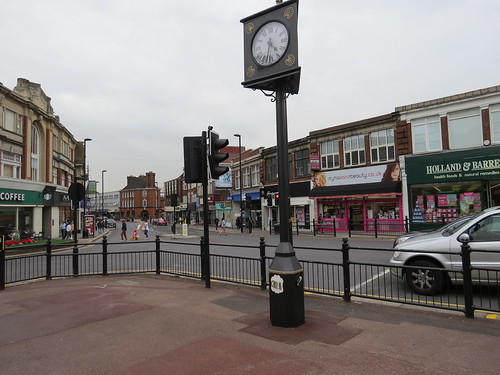 This rather spindly affair has a little plaque on its base which proclaims “2014”. It is nice that new clock towers are being put up, but this one is a bit pathetic.

Currently much of this site is being redeveloped as housing but it started life as Southgate Town Hall. The first part was built in 1894 and it was extended in 1916. 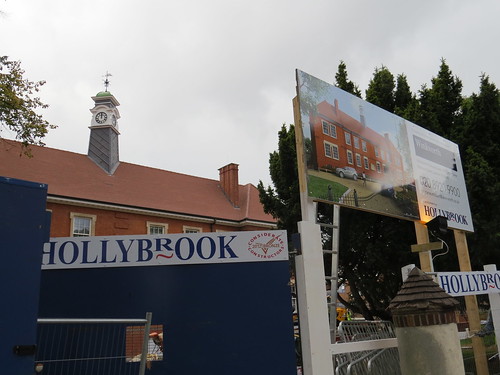 A Library was added in a separate wing in the 1930s, with this rather odd bridge arrangement. 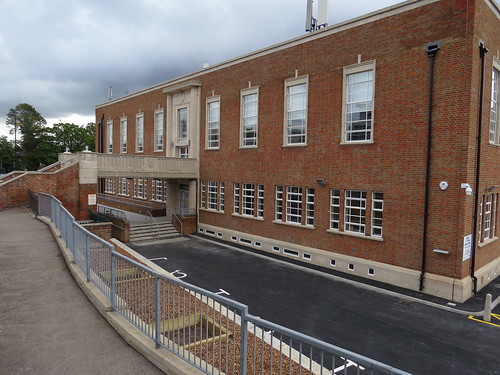 But at some point, presumably after Southgate Municipal Borough became part of the London Borough of Enfield in 1965 it ceased to be used as offices. However the library continued and is about to reopen after refurbishment.

They have left the Southgate Town Hall plaque. 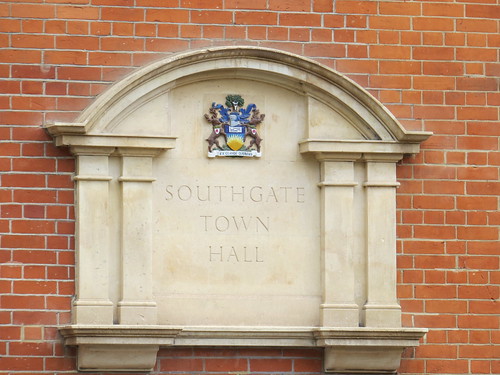 But confusingly, this of course is not actually in the place called Southgate.

Continue walking along Green Lanes. You go over one small bridge (which is actually the New River we have about in various previous posts) and then another. Stop at the second, which goes over a stream called Pymme’s Brook. (this by the way is the stream that flows through Arnos Park) 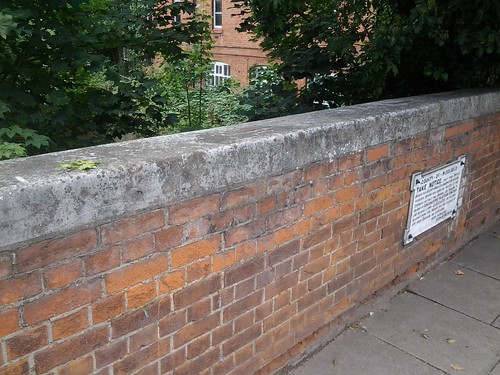 This is not much but I had to stop here because of the name! There is a great piece on this site which gives more info: http://www.bowesandbounds.org/profiles/blogs/solving-the-puzzle-of-deadman-s-bridge

Sadly this does not definitively solve the mystery of the name but it does throw some light on the signatory of this sign. 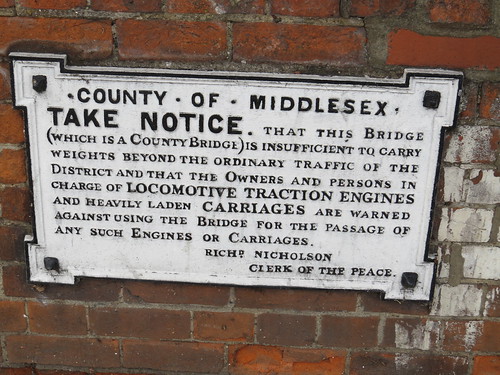 Keep walking along the main road and our next stop is just on the side street on the left before you get to the North Circular Road. 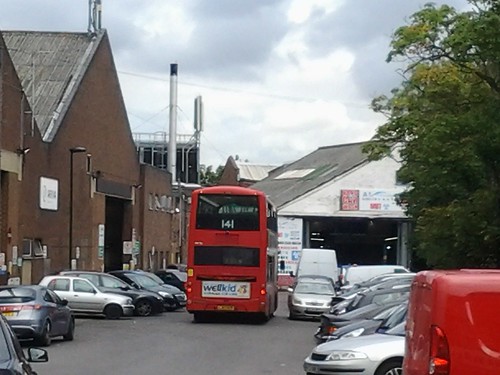 Palmers Green garage apparently started life as the Rosalie Skating Rink in 1910. But in July 1912, the London General Omnibus Company took over the site as a bus garage, which it has been ever since.

Because this garage was built when buses did not have upper deck roofs, the roof of the garage was not sufficiently high to allow later double deck buses to get in. In fact in 1952 they had to raise the roof by some 10 inches to enable the standard double deckers of that time to get in.

Retrace your steps along Green Lanes and turn left at the clock tower. Our next stop is just on the right.

This was originally called Palmers Green and Southgate and dates from the 1870s. It is on a line which forms part of what is known as the Hertford loop. When the loop was finally completed just after the First World War, it provided an alternative route between Alexandra Palace and Stevenage creating additional capacity on the East Coast main line without the need to widen the viaduct at Welwyn. It is usually used by local trains but occasionally long distance trains are diverted by this route. 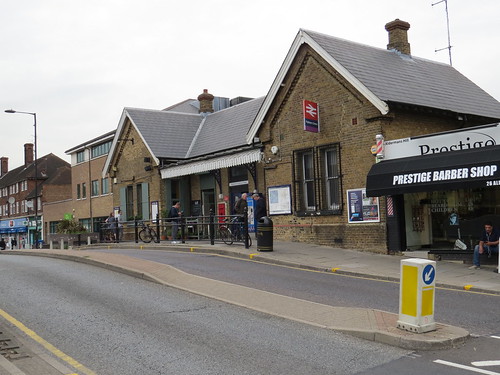 This station seems to have survived reasonably well. However it does not have a great service, only having 3 trains an hour and in the daytime in the week they go to Moorgate. But there is an easy connection at Highbury and Islington for the Victoria line, and a less convenient connection to the Underground at Finsbury Park

As the road bends to left, you will see a gateway. The main gate is closed off but you can go through a smaller side gate. 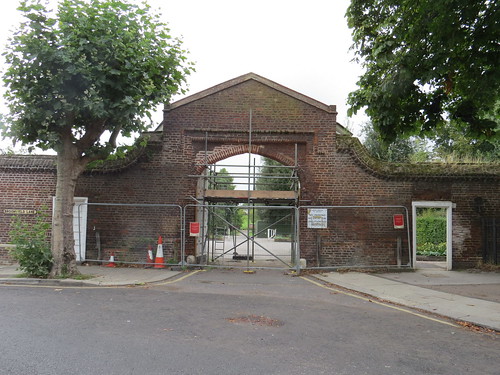 You are now in Broomfield Park which was opened in 1903. Walk straight ahead and you will see the rather sad site of what is left of Broomfield House. Parts of this house date back to the 16th century. In its later days it was used by Southgate and then Enfield Council but it has suffered three devastating fires in 1984, 1993 and 1994. 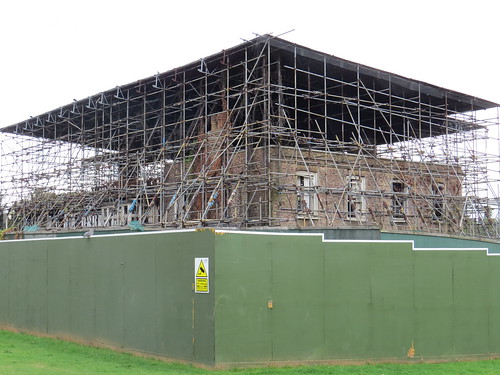 Broomfield House was featured on the BBC television series Restoration in the first series in 2003 as one of three nominees for the south east segment of the show, the other two being Wilton’s Music Hall in the East End and Darnley Mausoleum in Kent. In the South East heat, Broomfield House lost out to Wilton’s Music Hall, which in turn lost out to the series’ overall winner which was Victoria Baths in Manchester.

According to the English Heritage “Buildings at risk register” http://risk.historicengland.org.uk/register.aspx?id=47657&rt=0&pn=1&st=a&ctype=all&crit=broomfield+house :

“The building is severely fire damaged, although significant parts of the interior are in safe storage. A joint Council-Community bid to the Heritage Lottery Fund in October 2012, to rebuild and reopen Broomfield House as a heritage, learning and community centre, was unsuccessful. However, discussions are ongoing with regards to the future use of the building and possible sources of funding. ”

It also says the condition of the building is very bad. Given it is now over 20 years since the last fire, one wonders whether a solution will be found before the building is beyond repair.

Now walking around the house and then away from the house keep the water on your left and exit the park through the gates ahead of you. These are called to Coronation Gates because they date from the time of the coronation. 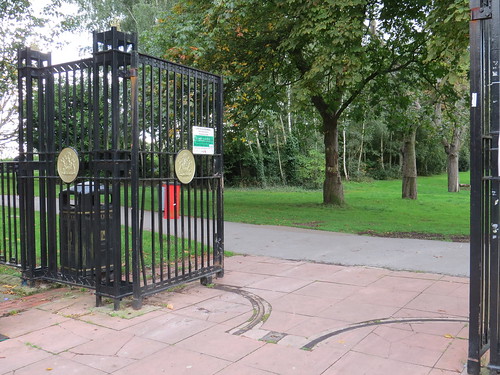 As you leave the park there is a little plaque on the right which shows it was not only to commemorate the coronation but also the fiftieth anniversary of the acquisition of the park (by Southgate Urban District Council). 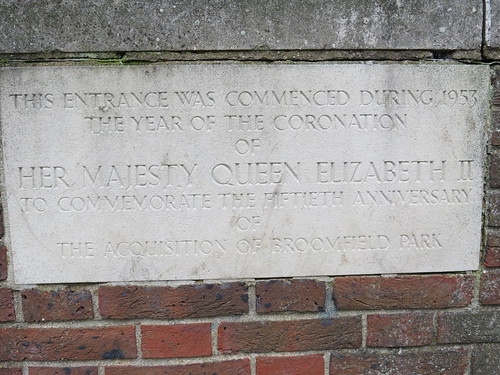 And on the other side of the gates is  a rather dull relief which I assume dates from this time also. 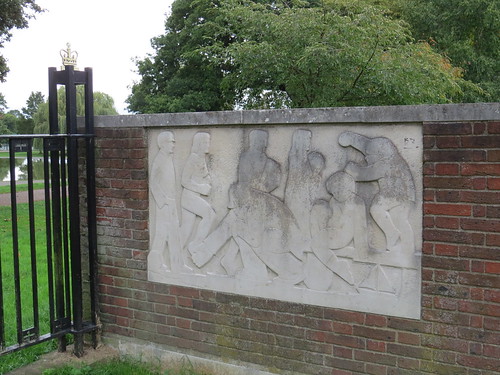 Turn left out of the gates and as we walk along Aldermans Hill be sure to look back over the fence across the park. At one point you will see in the distance Canary wharf and the City (well the Shard and a couple of the buildings, but strangely not the Gerkin which seems to be hiding behind another building!) 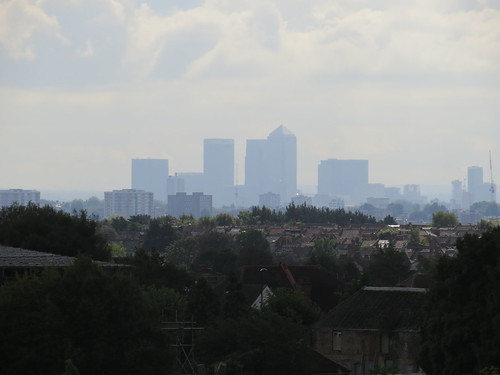 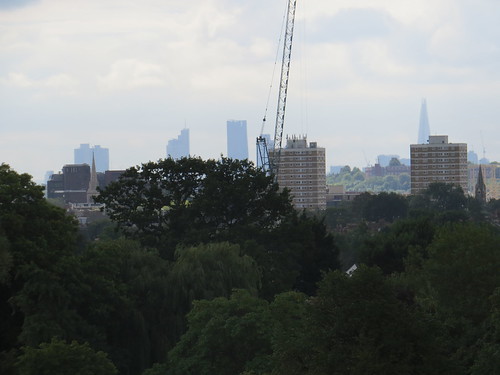 Just a little way along on the right is our final stop. 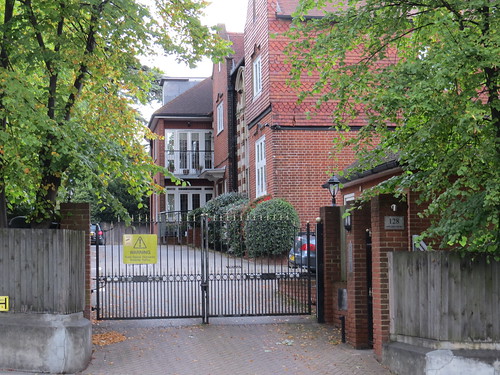 Built in 1892 and originally called Old Park, it was converted to flats in 1995.

We have now reached the end of our N13 walk. Palmers Green is perhaps not the most interesting postcode we have visited and yet there are one or two things worth a quick visit.