N21 is Winchmore Hill. This is the furthest north of the North London postcodes and it does seem curious that this area has a London postcode. Equivalent areas this far out in other parts of London do not. But quirkily there is a bit of an E postcode which actually goes further north than N21, but that is another story.

We start our walk at Winchmore Hill Post Office which is Number 822, Green Lanes. Turn right out of the Post Office and our first stop is ahead just as the main road bends to the right.

Here we have another pub that has not made it through these difficult times. 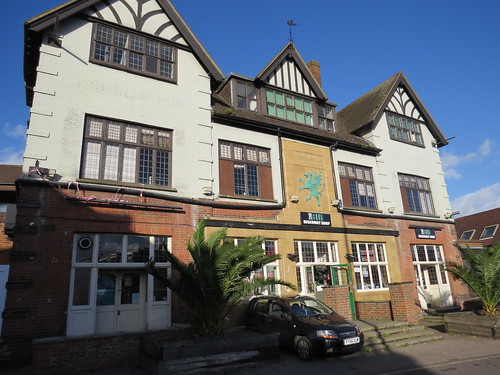 There has been a Green Dragon pub in Winchmore Hill for a long time – the 18th century, possibly as far back as the 1720s. The original pub was a bit further up the road at the junction of Green Dragon Lane. According to Wikipedia, it is said that a highwayman was caught and executed on a gallows erected by the Green Dragon’s front entrance. These gallows were not pulled down for a number of years, which might have prompted the owner to move the pub near the end of the 18th century to its current location at the bottom of Vicars Moor Lane .

The building we see today was extensively remodelled in 1935. But it closed as a public house in 2015. It is some kind of discount shop at the moment but it seems it is destined to become a Waitrose in the near future.

But I guess even when this becomes a Waitrose, there will still this little reminder of the former pub. 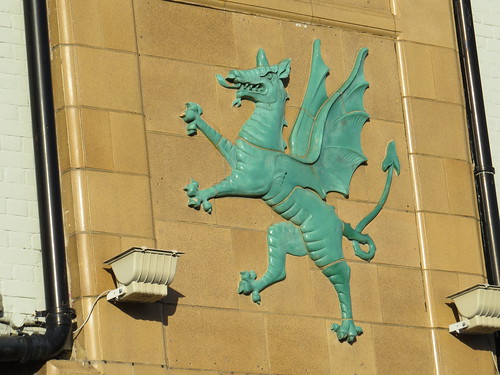 As J R R Tolkein says in the Hobbit: “So comes snow after fire, and even dragons have their endings.”

This quote is kind of fitting in the context of pubs. They seem so much part of the scene and yet many are slipping away almost without anyone being able to stop them going.

Go along Vicars Moor Lane. Our next stop is on the left.

This ordinary looking house has an Enfield plaque to Thomas Hood (1799 – 1845) who was an English author and humourist. 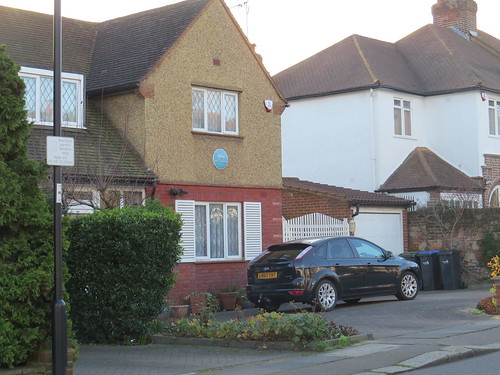 He is known for poems such as “The Bridge of Sighs” and “The Song of the Shirt”. I rather liked this verse of his:

No sun – no moon!
No morn – no noon –
No dawn – no dusk – no proper time of day.
No warmth, no cheerfulness, no healthful ease,
No comfortable feel in any member –
No shade, no shine, no butterflies, no bees,
No fruits, no flowers, no leaves, no birds –
November!

Hood wrote regularly for periodicals such as The London Magazine and Punch. He later published a magazine called “Hood’s Magazine and Comic Miscellany” which  largely consisted of his own works, apparently.

And here is the actual plaque. 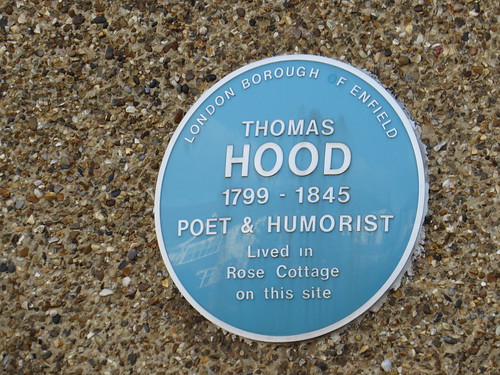 Continue to the end of Vicars Moor Lane (quite a walk). Turn left into Wades Hill. Our next stop is at the end of this street by the mini roundabout on the right. 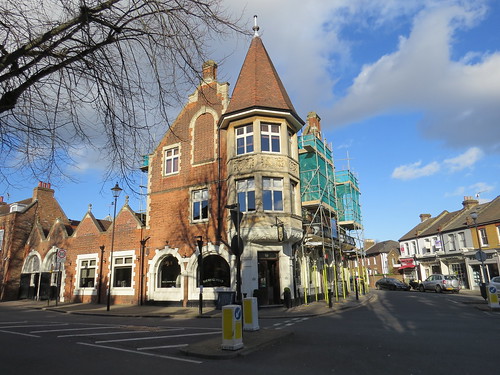 This building dates from 1899 and is described by architectural historian Pevsner as “bold and jolly”. But here’s a curious thing. Look up and you see this on one of the chimneys. 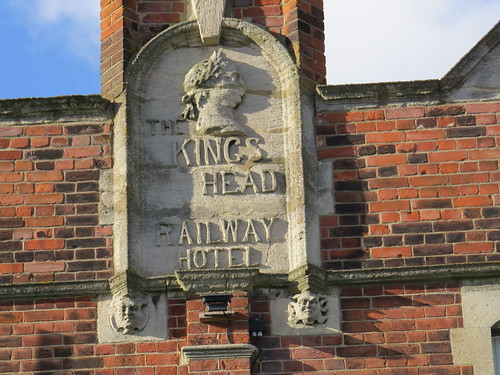 Curious because this building is not actually by the station or even the railway line.

Go around the pub turning right and going along this road (which is The Green and becomes Church Hill).

Now keep a look out for a bench on the right hand side. As I have said before, I do like to look at those little inscriptions you get on benches. They often give you lovely insights, but often frustratingly do not give you quite enough information. 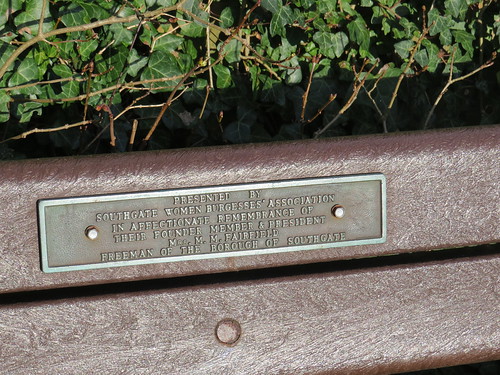 Take this one. It was placed by the Southgate Women Burgesses Association and is in “affectionate remembrance of their founder member and president Mrs M M Fairchild.”

How fascinating that there was a “Southgate Women Burgesses Association”. A Burgess was originally a freeman of a borough but later it came to include any elected or unelected official of a borough. Southgate Borough Council existed for just 32 years (1933 – 1965) and had a mayor, seven aldermen and twenty-one councillors. So the Southgate Women Burgesses Association must have been a fairly exclusive club as there cannot have been many women in this group.

But what is frustrating is that there is no date on the plaque to pin this down. Nor does an internet search yield any information. The Association probably does not still exist and even if it did, they probably have not got around to using the internet.

Keep walking along Church Hill and our next stop is on the right.

Here is a lovely example of an old Friends’ Meeting House. This Quaker establishment dates from 1688 but this building comes from a century later – 1790. 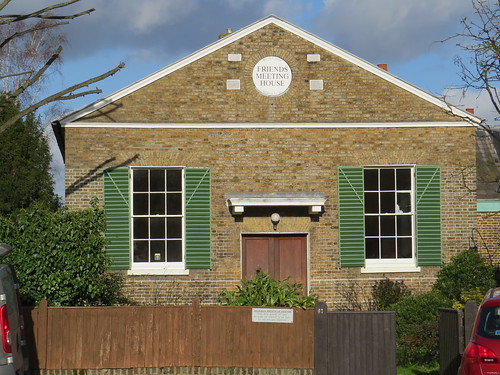 And if you go to the left there is a graveyard. Immediately as you go in your right you will see a series of graves for the Hoares. Note in particular the one for Samuel Hoare. 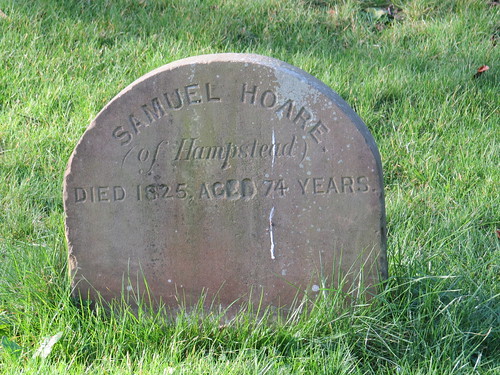 Samuel Hoare Junior (1751 – 1825) was a wealthy banker born in Stoke Newington. His London home was for many years Heath House on Hampstead Heath, which we passed without comment in NW3 – it is just near Jack Straw’s Castle. He was one of the twelve founding members of the Society for the Abolition of the Slave Trade.

In 1772 he became a junior partner in the bank of Bland and Barnett. This became Barnett, Hoare & Co. They were the London agent of the Birmingham based Lloyds Bank. The bank traded in Lombard Street under the sign of the black horse. Lloyds Bank formally took over the company in 1884 and in doing so Lloyds adopted the black horse sign which continues in use as the Lloyds logo.

However this is a separate line of Hoares from the ones associated with the bank C Hoare and Co, which was founded in 1672 by Sir Richard Hoare. That is still trading. It remains family owned and is currently managed by the 11th generation of Hoare’s direct descendants.

Keep going past the house and you will see a seat and a solitary grave stone just by it. 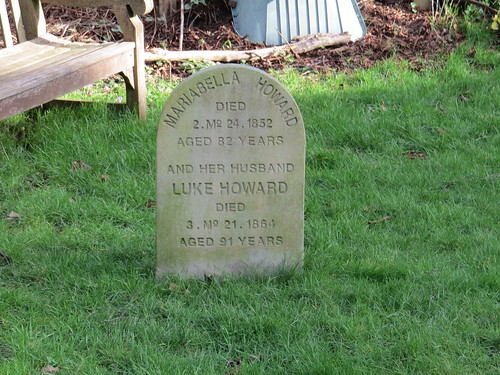 This is the grave of Luke Howard and his wife (or rather as the stone has it – Mariabella Howard and her husband, Luke). We came across him in Bruce Grove, N17 where there is a blue plaque which delightfully describes him as “The Namer of Clouds”.

Keep walking along and on your right you will see a development of town houses called Hill House Close. 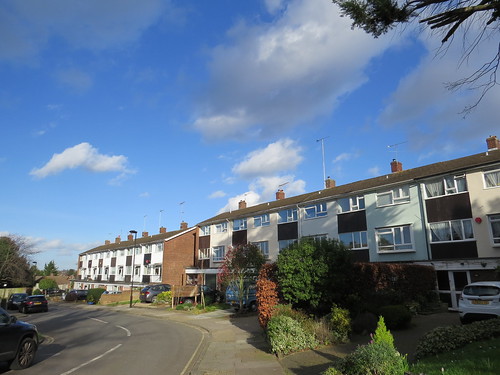 But just before there is this little curiosity. 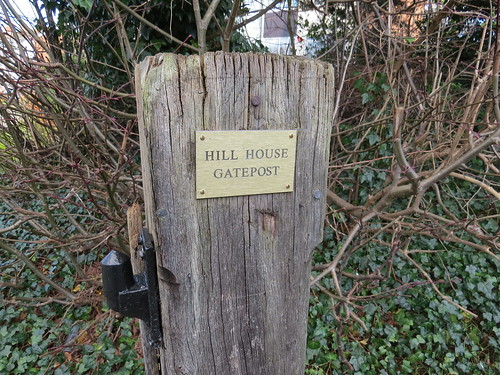 A little reminder that there must have been somewhere called Hill House just here and it had gates. But why go to the trouble of putting a little plaque here to tell us this was the gatepost of Hill House. I can find no information about Hill House.

Our next stop is just over the road on the left.

This church dates from the 1820s and is described by Pevsner as “A cheap Church of the Commissioners type”. It was built on a site given by Walker Gray of Grovelands – which is the big house down the road (which we saw in Southgate, N14). 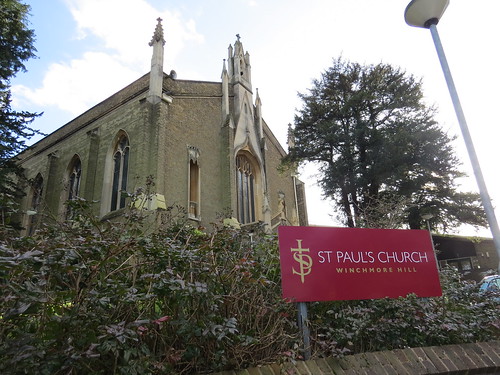 Retrace your steps along Church Hill. At The Green after the Kings Head, keep on following the shops on the left. Ahead is Station Road and our next stop.

Here we have the station which opened in 1871 and which was built by the Great Northern Railway. 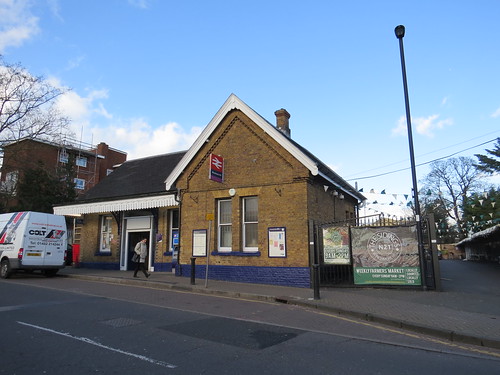 If you venture in, you will again see staircases denuded of cover. Seems to be a pattern in this part of London. 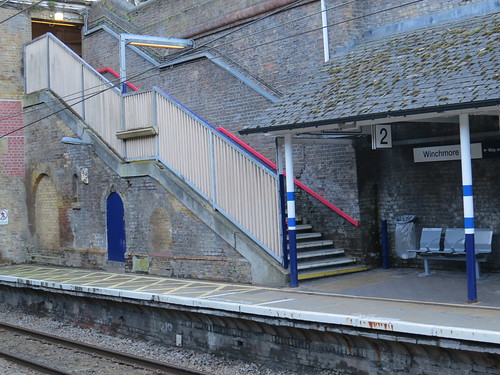 And the platforms have rather dull looking replacement canopies 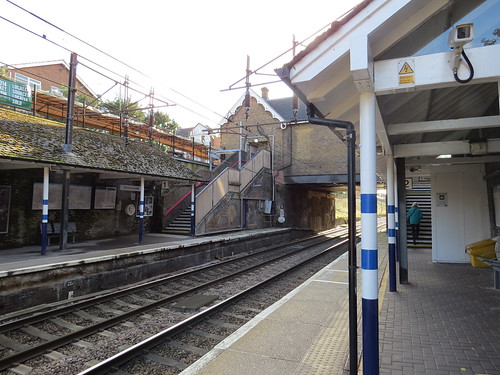 But I guess at least this station does have proper canopies on both platforms.

The arrival of the railway in the 1870s does not seem to have created a building boom immediately. It seems to have taken a while for Winchmore Hill to start being developed as a suburb and I guess it was as much the arrival of electric trams in 1907 on Green Lanes which really made development inevitable.

Keep walking along Station Road and our next stop is almost at the end on the left. 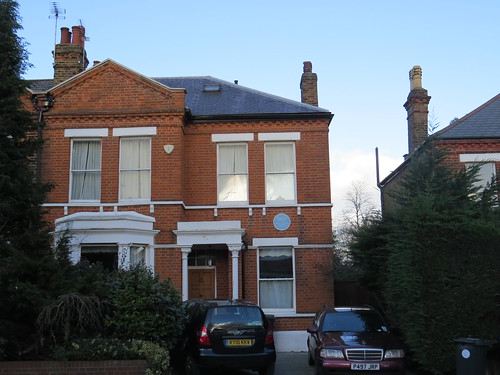 There is a green plaque erected by the Southgate District Civic Society. 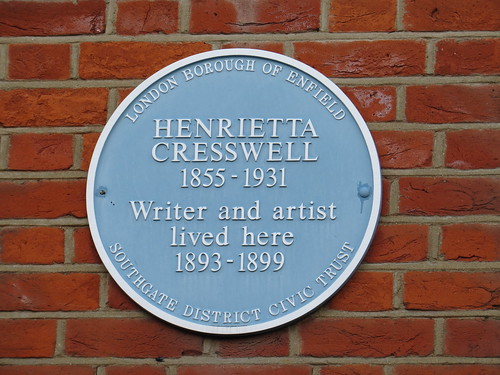 Her claim to fame is that she wrote a book called “Winchmore Hill: Memories of a Lost Village”.

She opens her book as follows:

“My father, John Cresswell, was a general practitioner at Winchmore Hill for fifty years, from 1842 till his death on November 9th, 1892. When he came he was a young man of 24, and he only slept away from home twice or thrice for a single night in more than forty years. There can only be a few people now who remember “The Old Doctor,” but there was a time when he brought nearly every new inhabitant into the village, and saw most of the old ones out.
In his time the somewhat primitive village developed into a considerable suburb, and in the fifteen years since his passing away it has become a modern wilderness of bricks and mortar, and has been “improved” nearly out of existence.
His sketch book was always in his hand and his drawing minutely accurate in detail. I hope some of the many dwellers in the new village may be interested in his sketches of the old, now passed away into “The Land of Long Ago.” I have attempted in a few chapters of word painting to give some idea of how we lived in Winchmore Hill in those days. I have made my sketches as true as I was able, and have done my best not to be too egotistical.
If I have failed in this I crave forgiveness.
HENRIETTA CRESSWELL
Dumfries, 1907.”
So this is a snapshot in time of a lost world. I wonder what she would have made of how Winchmore Hill looks today. The change from country village to suburbia was not quite complete when she wrote her book. But has really changed is, the way people live.
And you can buy this slim volume today through Amazon believe it or not.
If you look on Amazon, you will see one 5 star  review from August 2015 which reads:
“beautiful book, lovely writing. Amazon…………pay your taxes in the UK! “

Continue along Station Road to the end. Our next stop is ahead of you on the main road (Green Lanes).

Here we have a boxy dull looking office block called Capitol House and only its name belies what once stood on this site. 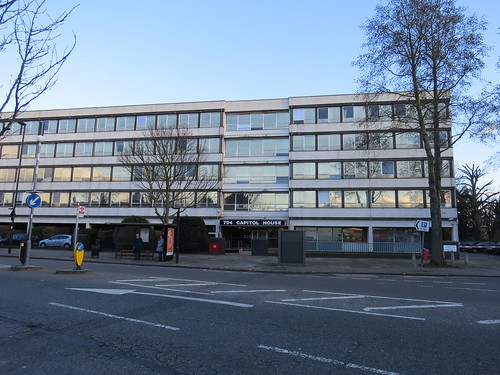 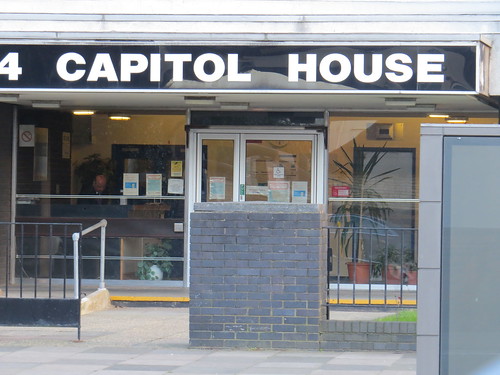 This was the site of the Capitol Cinema. Designed in Art Deco style by the prolific cinema architect, Robert Cromie, the cinema opened on 29 December 1929. It was taken over in December 1930 by ABC Cinemas, which ran it until its closure in December 1959. It was demolished the following year and replaced by this office block.

It must have looked strange to have a large cinema here. It seems to have been the only one in the immediate area and it is hardly surprising it did not make it through the 1950s. And no doubt the area was not deemed to be a promising location for a bingo hall, so it was worth more as a commercial building plot.

Unlike Barnet House in N20, this 1960s building is not so large and so out of keeping with its surroundings. But I think an old cinema building would be a nicer addition to the street scene.

We are now nearly back where we started. Winchmore Hill does not have a great deal to offer in the way of sights but it is a nice enough area with its lovely village setting to the west of the railway – although to the east it does seem to be rather dull suburbia.

For onward travel return to Winchmore Hill station or else there are various buses on Green Lane.

1 thought on “N21: Even dragons have their endings”