N15 is South Tottenham but I guess if you asked people they may well identify N15 as Seven Sisters.

Brewer’s Dictionary of London Phrase and Fable suggests the name comes from around 1350 when seven sisters about to go their separate ways planted seven elm trees in a ring around a walnut tree. The walnut had died by 1790 but the elms lasted long enough to give their name to a turnpike road built in 1833 to provide improved access between Tottenham and Westminster. Later seven daughters of a Tottenham butcher planted a new set. Neither set of trees has survived til now.

But there is a ring of seven trees today. The current ring of hornbeam trees was planted in 1997 in a ceremony led by five families of seven sisters – presumably they could not find seven lots of seven sisters all to turn up on the same day.

Talking of Sisters brings to mind the Beverley Sisters whose signature tune was of course the song “Sisters”. I had a look to see if I could find a video of them singing it. I could not find them singing the whole song – amazingly. But I did find this. A five minute disco version! The song is in there somewhere!  https://www.youtube.com/watch?v=IHVRWwXr6Zs&index=24&list=PLOVfze_5YWZhMZ-eEymNoC40OKnOXlE_d This is nothing to do with Seven Sisters. The Beverley Sisters actually came from Bethnal Green but I could not wait til then to share this!

We start the walk at Page Green Post Office,  87 Broad Lane. Turn left out of the Post Office and walk along Broad Lane, until it bends off to the left. Take a right turn down Markfield Road. Continue past the industrial sites and go under the bridges and head into Markfield Park.

Markfield Park was officially opened as Markfield Recreation Ground King George’s Field by the Mayor of Tottenham in 1938 and later expanded to include the site of an old sewage works, part of which still stands today. It forms part of the Lea Valley Regional Park. 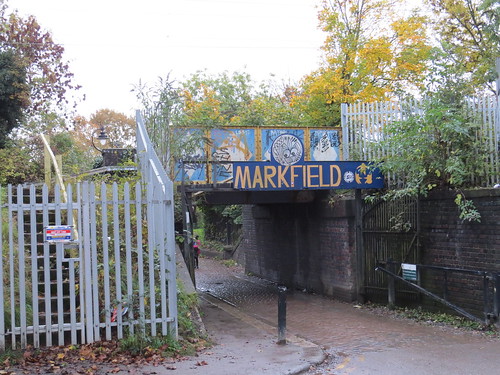 Walking into the park there is a certain gritty reality, with the graffiti styled signage. The former sludge tanks were turned into a communal garden space; however, due to neglect and poor security, the entire area was allowed to become extensively vandalised and overgrown. But the park was revitalised in the new Millennium. 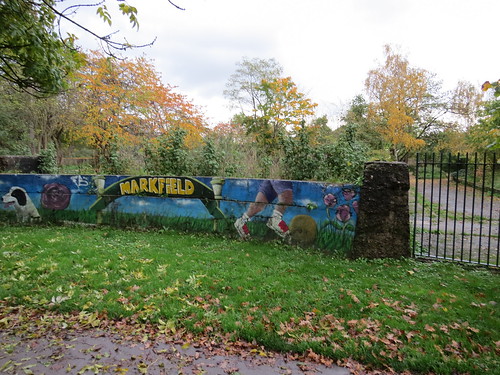 And so turning left once you get into the main park you will see the remains of the Tottenham sewage treatment works and pumping station. 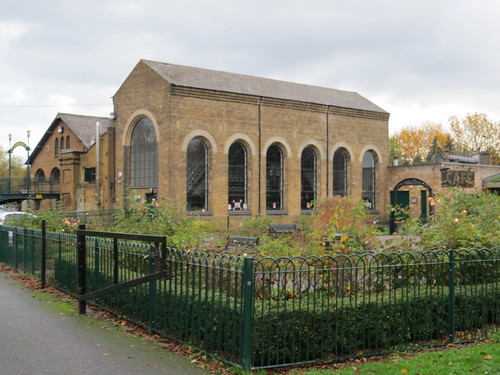 The pumping station had a steam engine built by a company called Wood Brothers of Sowerby bridge in Yorkshire and commissioned in July 1888. It worked continuously until 1905 when it was relegated to standby duty – basically storm water pumping. By the late 1950s, sewage treatment technology had moved on but this site was too small to have a more modern system installed, so it was decided to divert the sewage through a new sewer to a rebuilt Deephams Sewage Treatment works at Edmonton, thus rendering the pumping station redundant. This happened in 1964. These works were closed and apart from the engine house building the site was levelled.

A full restoration of the park was completed by April 2010, and the park, museum, and beam engine re-opened for public access.

Quite why the pump house survived who knows , but it does mean this rather wonderful piece of Victorian engineering is still with us. It does have rather erratic opening hours but you can peek in the window and get a glimpse of the engine even when the building is closed. 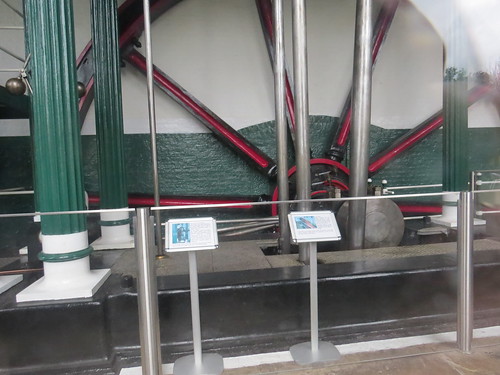 Retrace your steps to Broad Lane and just near the Post Office is a green on the left. This is Page Green Common. 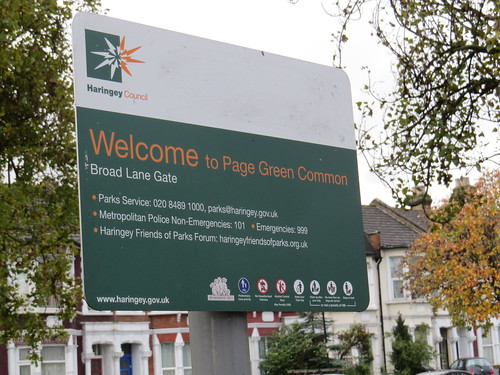 This little green was where the original seven elms and walnut tree stood, but at the western end of the green. Today the trees are kind of in the middle of the green. There is no sign so far as I could see. But these are definitely the seven sisters of today. 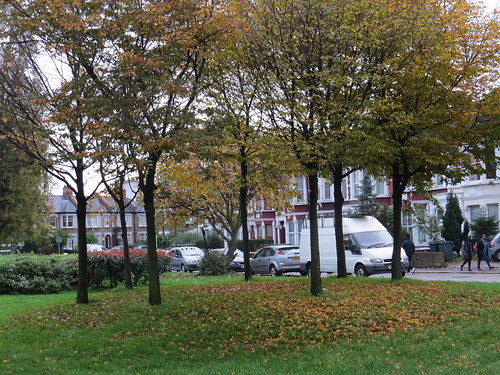 Continue to the end and turn left at the main road. Cross the High Road at the junction with Seven Sisters Road where just after a clock tower you will see a ghastly office block called Apex House. 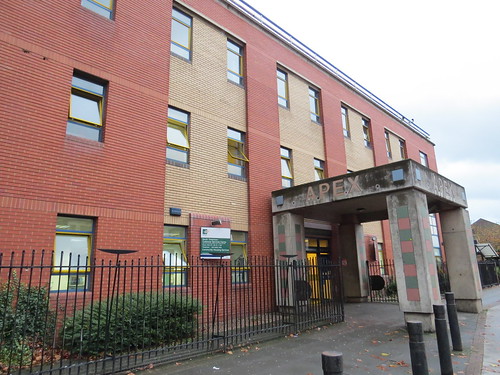 So here we have another dull office block and guess what – this was built on the site of an old cinema.

We are at the junction of the Seven Sisters Road and Tottenham High Road and so I suppose it was not surprising that the cinema which opened here in April 1911 was called the Corner Picture Theatre. It seems to have been independent of the big cinema chains all its working life until it closed in August 1960. It became a bingo hall for a few years and was then converted into a music club, named the Noreik Club. It later became a nightclub, finally closing in 1979. The building was demolished in June 1980 and an office block was built on the site in 1988.

Not sure why it is called Apex House other than you might call the location an apex being at the junction of two roads. 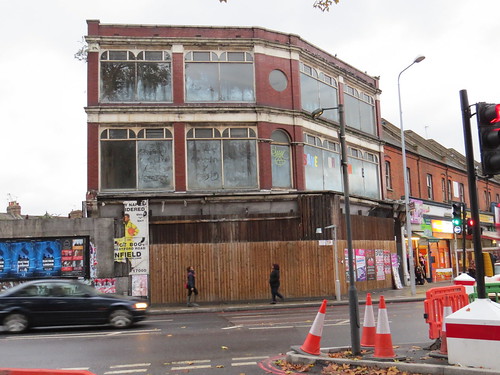 It is known as Ward’s Corner and is about to be redeveloped. It was once a furniture store (called not surprisingly Ward’s) which traded until 1972.  The Council wanted to redevelop the whole site but in the meantime it became an indoor market. There was a community backlash against the redevelopment and a community group established itself in 2007. https://wardscorner.wikispaces.com/

The tale seems long and convoluted but it looks like now the old Edwardian building will be demolished and the site along with adjoining land will be redeveloped with new housing.

Continue walking along the High Road away from Ward’s Corner. Soon you will see a road veering off to the left. This is called Town Hall Approach Road. And it leads to the old Town Hall. 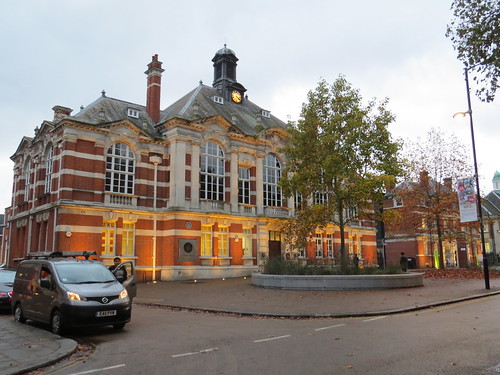 This was built by Tottenham Urban District Council in 1905. The Council became a borough in 1934 and Tottenham Borough Council was merged with Hornsey and Wood Green to form the new London Borough of Haringey in 1965.

This building is part of a handsome row of buildings which at one time included a fire station, public baths and a school. 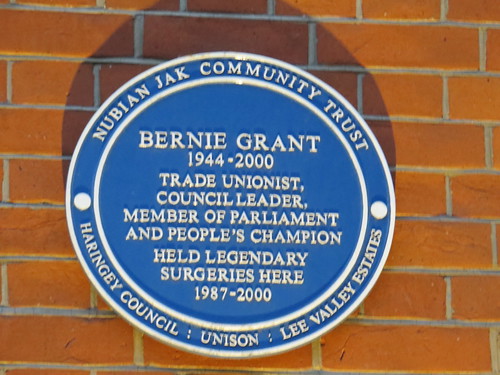 He was the local MP and was one of the first wave of black MPs elected, along with Dianne Abbot, Paul Boateng and Keith Vaz who all entered parliament in 1987.

No longer municipal offices the Grade II listed building has been remodelled. Some of the old Town Hall including the grand foyer and Moselle Room with its Moorish-Jacobean style ceiling now serves as a conference and wedding venue which calls itself “The Dream Centre”. There are also just over 100 new homes in this development arranged around two large south facing courtyards which provide amenity space for residents.

Continue walking along and you get to the old Swimming Pool. 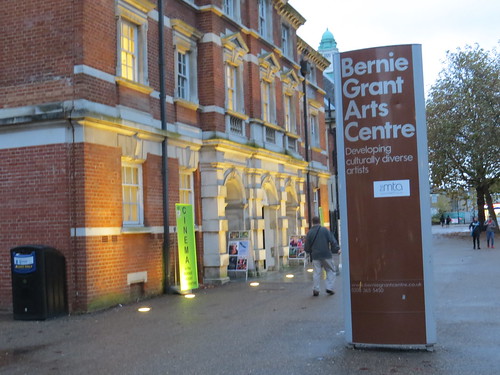 This was converted in 2007 to become the Bernie Grant Arts Centre. The Centre was designed to spread its activities over three buildings, meaning that disparate activities can take place at the same time. The inter-related buildings comprising the centre are

According to their website, the architect, David Adjaye, said “It is arranged as a linear acropolis, with a major performance space at its heart, with meeting spaces in the gateway building and enterprise units in the long building. The open spaces make connections with the surrounding areas.”

And if you walk down the side of the left hand side of the building, you will see how this works, as you enter Paul Square. 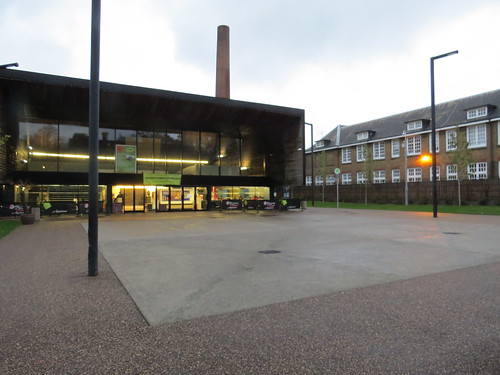 And if you look back on the building you have just passed you will see why it is called Paul Square. 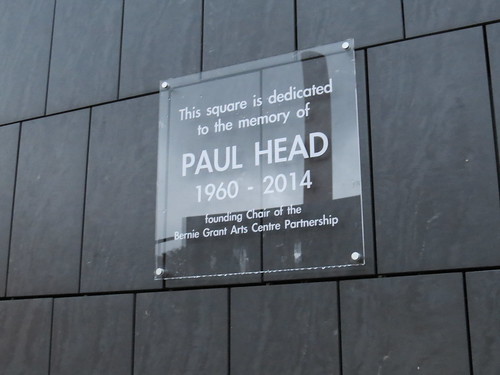 It is dedicated to the memory of a man called Paul Head who was the founding chair of the Bernie Grant Arts Centre Partnership. He was also the principal and chief executive of the Tottenham-based College of Haringey, Enfield and North-East London. This is a fairly recent development with the naming ceremony only taking place in September 2015

Return to the front of the Bernie Grant Arts Centre and turn left. Keep walking to the end of the street and turn right into Philip Lane. Our next stop is just on the left.

Tottenham Bus Garage has been on this site since 1913. It was originally built by the Metropolitan Electric Tramways to house buses to support their tram network 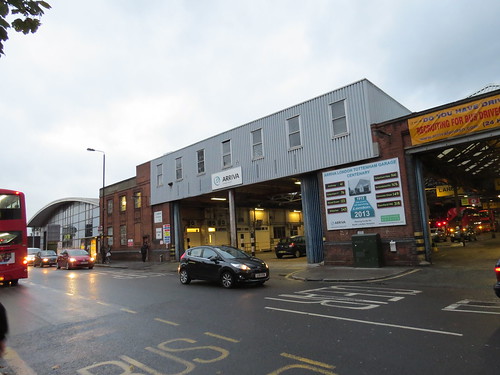 And they even still have a sign to remind us of their heritage. 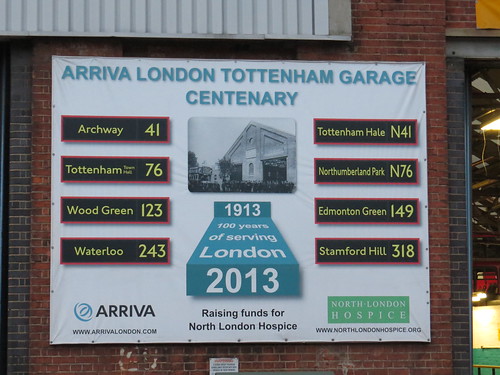 There is a bit of an old building under there somewhere.

Walk past the church on the right and our next stop is just by the junction with the High Road. 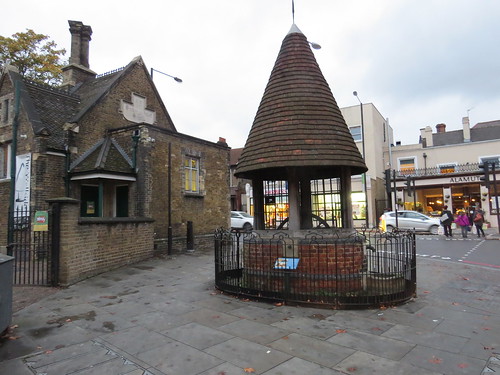 This is the site of the High Cross pump, according to architectural expert, Pevsner. The well was sunk in 1791 by the Lord of the manor, Thomas Smith, after he had enclosed the previous well in front of his house to the west of the Tottenham Green. The well head with its tiled conical roof dates from a rebuilding in 1876.

Our next stop is a little way along on the left. 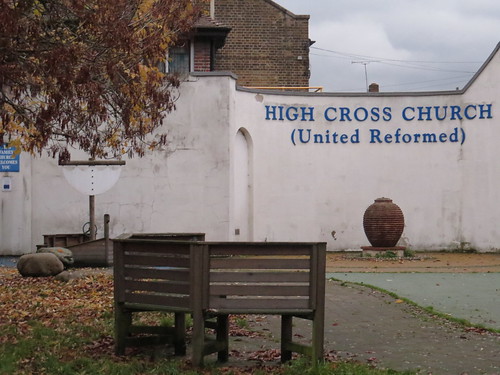 Set back off the road is the High Cross United Reform Church. Nothing particularly special about this church except it has one of the Haringey green plaques on it. (This is to the right end of the building near the side road)

Priscilla Wakefield (1751-1832) was a Quaker author who wrote a number of travel and science books for children and was actively involved in the abolition of slavery and prison reform. She was a founder of the Lying-in Charity for Women and the Penny Savings Bank. She lived in Ship Inn Yard near High Cross United Reform Church, hence I guess why the Council decided to place the plaque here in May 2008. Once again we see a Haringey plaque a little the worse for wear. 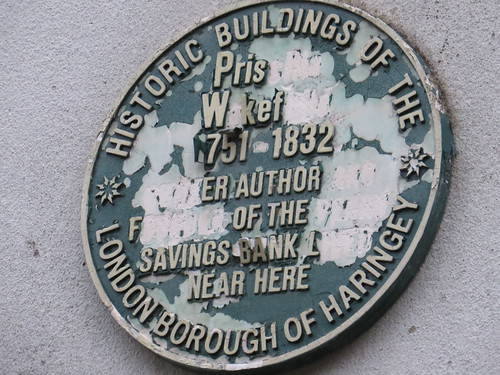 So that brings us to the end of the N15 walk. Or not quite. If you go back up the High Road away from the Church you will get to a junction and just over that (and just in N17) is the Tottenham High Cross. As we will probably not get to this in N17, I thought I would include it here.

Tottenham High Cross was erected in Tottenham in the early 1600s by Owen Wood, Dean of Armagh. This was site of a wooden wayside cross first mentioned in 1409 and marked the centre of Tottenham Village. The present high cross was constructed of plain brick, which was later stuccoed and ornamented in the Gothic style in 1809.

Tottenham High Cross is often mistakenly thought to be an Eleanor Cross, which marked the resting places of the body of Queen Eleanor (wife of King Edward 1) as it returned to London in 1290. Possibly this is because it is only a few miles south of one of the true Eleanor Crosses at Waltham Cross. But we have heard the Tottenham cross has a quite different origin.

So that really does bring us to the end of the walk. Probably best to head back down the High road to Seven Sisters tube. but there are also lots of buses along here for onward travel.