SE12 is Lee – a sort of in-between place with not a lot going on. It is one of those areas which people are hard pressed to pin point and when you get here you can see why. It is a little – how do you say – uninspiring. And unfortunately the historic bit of Lee turns out to be in SE13.

We start our walk at Lee Green Post Office, 161 Lee Road. This is by the cross roads on the A20 which seems to be what passes for the centre of modern day Lee.

Turn right out of the Post Office and our first stop is almost immediately next door.

Here we are on the north east corner of the cross roads which is dominated by a closed down pub. 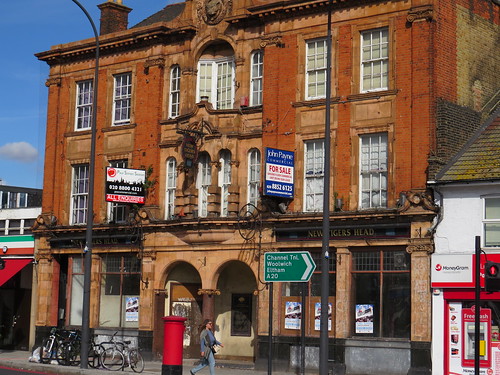 This is the New Tiger’s Head, as opposed to the Old Tiger’s Head which is over the road and which we will see next.

It looks like it was built during that boom in pub building in late Victorian times and it has an elegant double arch entrance way. Inside the archway, there is a plaque giving some information as to the origin of the pub. 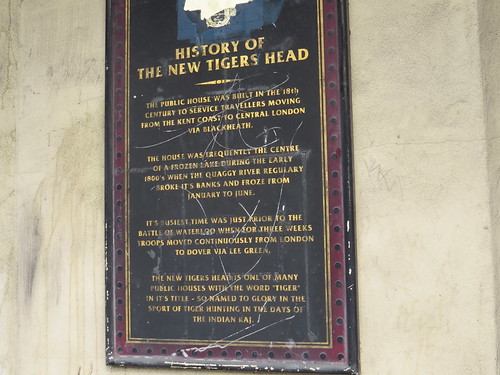 Really? I have to say I do not recall seeing another pub with the word “Tiger” in its name.

This pub seems to have been closed for many years and is a sorry sight.

Now cross the road to the north west corner of the cross roads..

Here we have the Old Tiger’s Head which is still functioning as a pub. 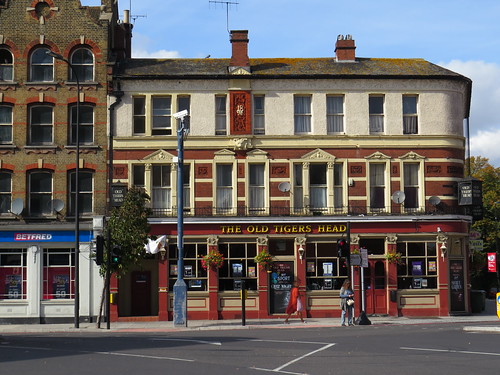 “Confusingly, the original (Old) Tiger’s Head is thought to have been built on the site currently occupied by the New Tiger’s Head. The original pub is thought to have been built before 1730. It was rebuilt on its present site, the north-west quadrant, in 1750–1770 and then rebuilt (in its third incarnation) in 1896 – the date carried on its frontage. It became an important mail and coaching inn. The New Tiger’s Head started life as a beer shop known as the Tiger Tavern in the 1830s. It was situated in the end of four cottages known as Prospect Terrace built around the same time. Three of these cottages remain, housing a post office/newsagent and a hairdresser. In 1868 it is referred to as the Tiger’s Head Inn. The present building is thought to have replaced the original cottage a few years after 1896 – the date of the rebuilding of the Old Tiger’s Head.”

There is also some information on the Lewisham Council website:

“The Old Tigers Head is a corner pub that sits at the junction of Lee High Road and
Lee Road. The New Tigers Head sits across the road on the other corner within the
Royal Borough of Greenwich. This is a local landmark building and reflects the
evolution of the borough.

There is believed to have been a pub on this site since the mid 1700s. Historically
the pub sat on the side of the village green with the back to the Quaky River. It was a
resting place for troops marching to Waterloo in 1815.

The present incarnation of the pub was built in 1896 and is made of red brick with
rough render to the upper floor. The pub frontage is retained including the pilasters
and iron ventilation grills within the windows. There is a frieze to the eaves which
wraps around the building. On the Lee High Road elevation there is a moulded
terracotta date tablet which incorporates a tiger’s head. The first floor has painted
decorative pediments to the windows and surrounds and further terracotta reliefs.” 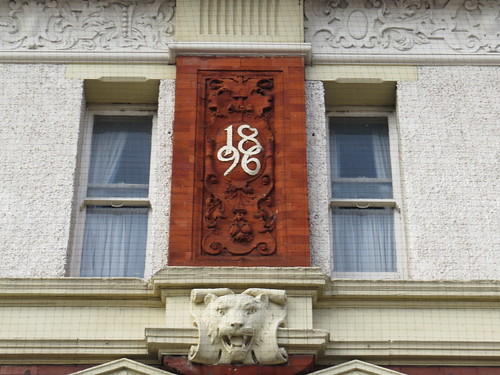 Now cross over to the south west quadrant which has been redeveloped as a rather ugly Sainsbury’s supermarket. 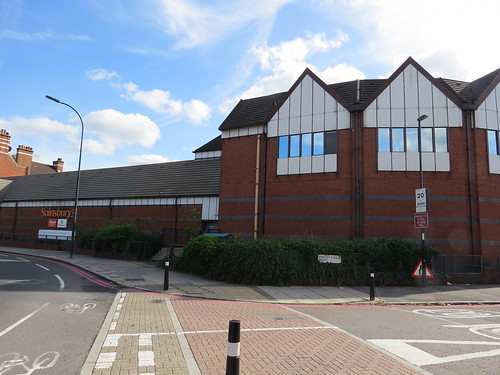 This was the site of the Imperial Picture Theatre which opened in December 1913. According to the wonderful Cinema Treasures website, it was taken over by new management in June 1928 and renamed Savoy Cinema becoming the Pullman cinema in April 1955.

It closed in June 1959 and was converted into a motor spare parts shop, and then a shopfitters, before being demolished in October 1986 and replaced by this dreary supermarket, which turns its back on the road.

There is a great link here which shows old cinemas in the borough of Lewisham and what the location look like now. Included is the cinema that was here. Scroll down to the heading “Lee”.

Now go back to the final quadrant of the cross roads – the south east one.

This is apparently Lee Green, according to the sign. 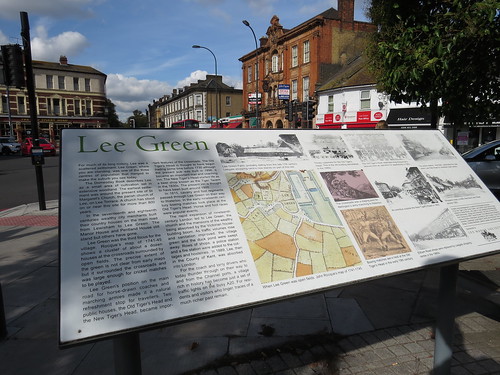 What is rather odd about this area is that there does not appear to be any actual green at Lee Green. 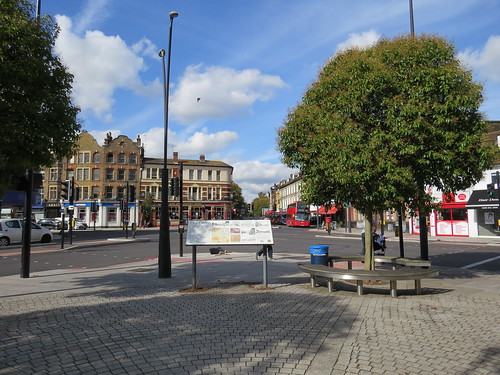 Maybe there was once and the council paved it over. 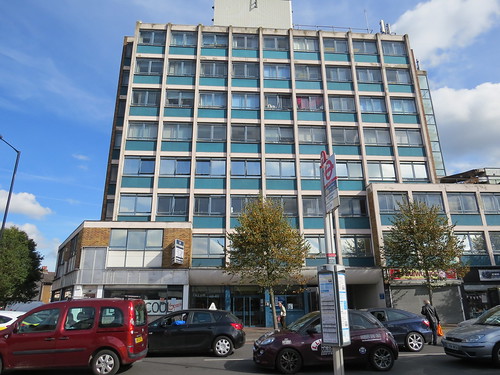 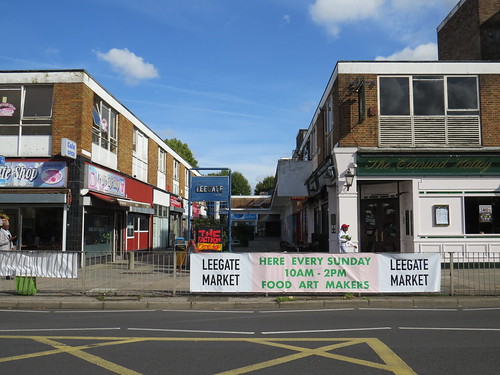 The only place that seemed to have any business was the Wetherspoons pub at the corner. 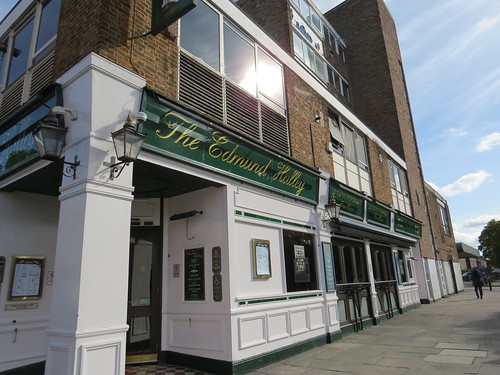 This is called the Edmund Halley. 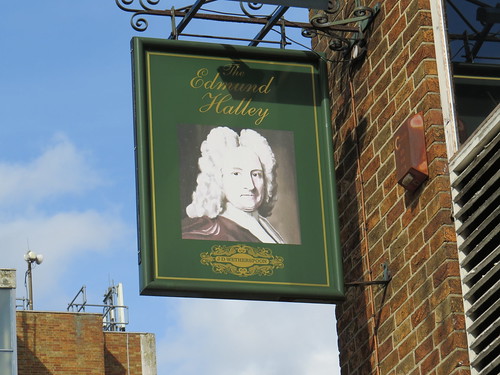 Edmund (or Edmond) Halley (1656 – 1742) was one of England’s greatest astronomers. He gave his name to a now-famous comet. So what has he got to do with Lee. Well he lies buried in the graveyard of old St Margaret’s Church. Sadly this is not actually in SE12.

The Wetherspoons website has a rather more extensive than usual section on the history of the area https://www.jdwetherspoon.com/pub-histories/england/london/the-edmund-halley-lee-green including a reference to the fact that Karl Marx lived for a time in Lee, though frustratingly there seems to be nothing on the web to suggest where.

Now continue down this street, which is Burnt Ash Road and our next stop is in a side street on the right.

The house we are looking for is on the left as you come from the main road. 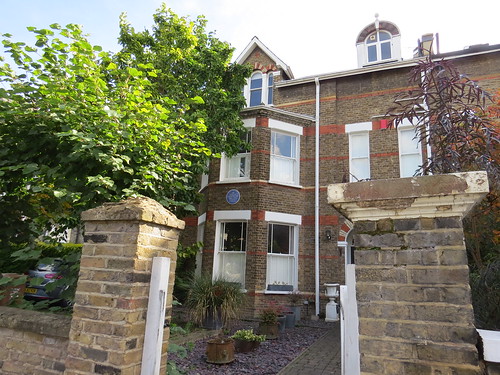 This was the birthplace of the publisher Sir Stanley Unwin, (1884 – 1968). He was one of the founders of the George Allen and Unwin publishing house in 1914. It published serious and sometimes controversial authors such as Bertrand Russell and Mahatma Gandhi.

Apparently we have Unwin to thank for the Lord of the Rings. In 1936 the author J. R. R. Tolkien submitted The Hobbit for publication. Unwin paid his ten year old son Rayner Unwin a shilling to write a report on the manuscript. He liked it and which prompted Unwin to publish the book. Once it became a success, Unwin asked Tolkien for a sequel. This was to become The Lord of the Rings, and the rest as they say is history. 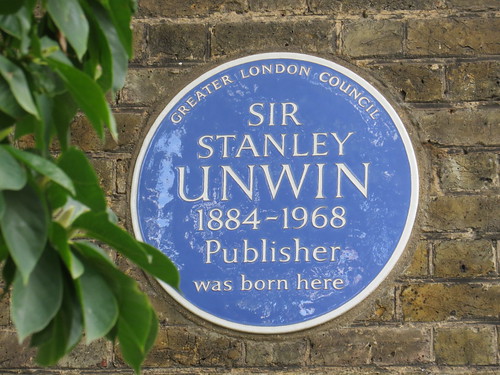 He invented his own comic language, “Unwinese”. This is where words are playfully and humorously altered – often it sounds like gibberish but there is always something that helps it make sense.  Unwin claimed that the inspiration came from his mother, who once told him that on the way home she had “falolloped (fallen) over” and “grazed her kneeclabbers”.

Sadly “Professor” Stanley Unwin does not seem to have a blue plaque anywhere.

Just at the corner of Southbrook Road is a pub called the Lord Northbrook. Lord Northbrook’s family name is Baring, as in the banking family and in the 19th century, they had an estate in Lee. 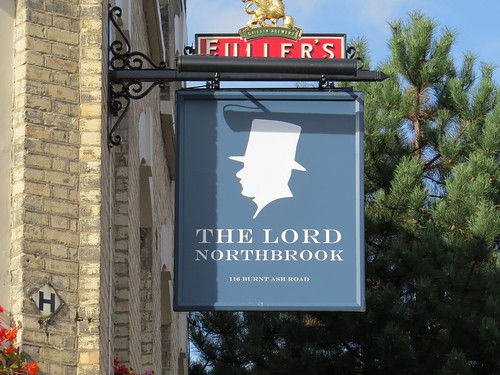 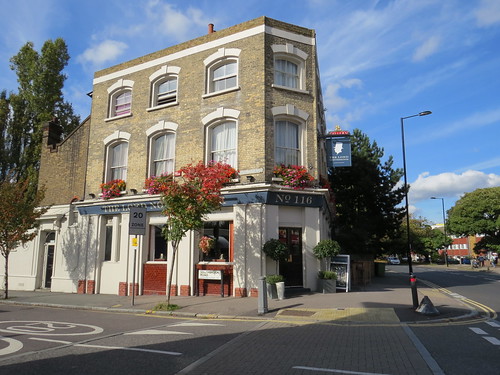 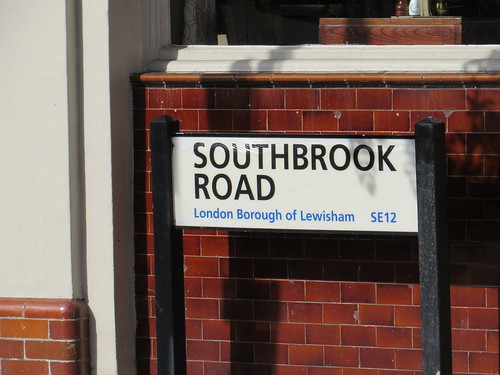 Apparently the keyboard player Manfred Mann lived in Southbrook Road – don’t know where or when though.

Keep going along Burnt Ash Road. You will soon get to a railway bridge and just beyond that a roadway to the left which leads up to our next stop. 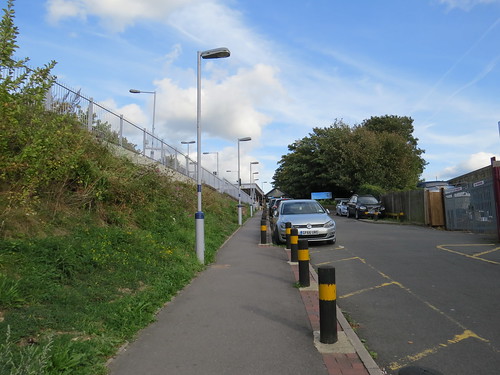 Go up this roadway and at the top you reach the ticket office to Lee station. 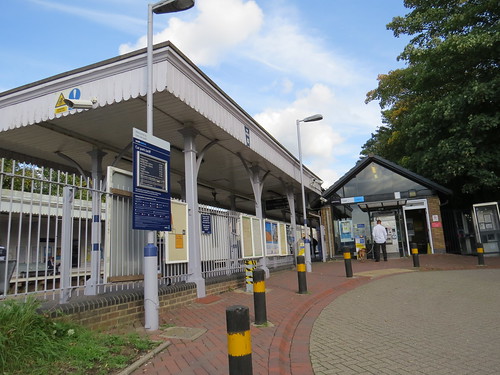 It is a modern affair but the platforms have retained their canopies and so look rather more traditional. 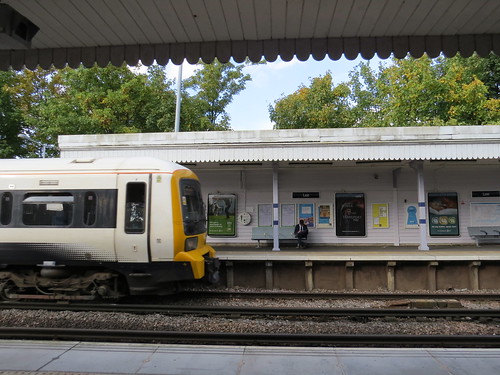 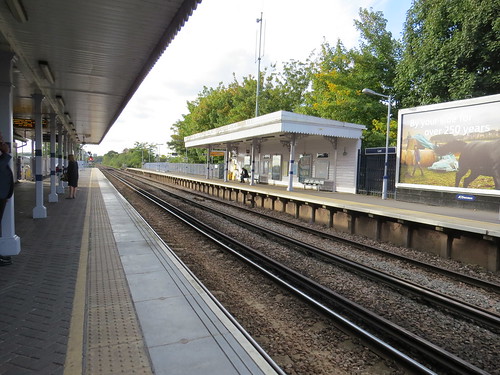 The line was electrified early on by the Southern Railway in 1926 and the platforms have been lengthened twice – in 1955 to accommodate 10 car trains and in 1992 to allow for 12 car trains.

I have driven many time along this particular stretch of road. It is significant because this junction is a place where suddenly the road switches being a basic little road to being a proper dual carriageway, so you suddenly find you go a bit faster. 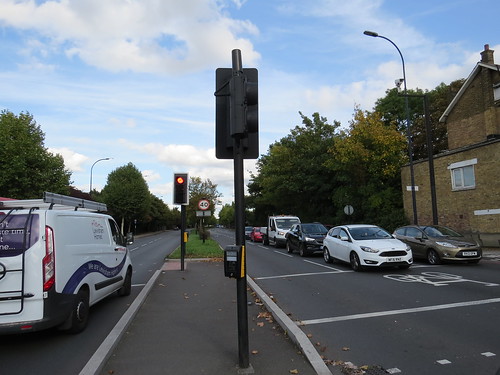 Or conversely when coming the other way a bit slower. 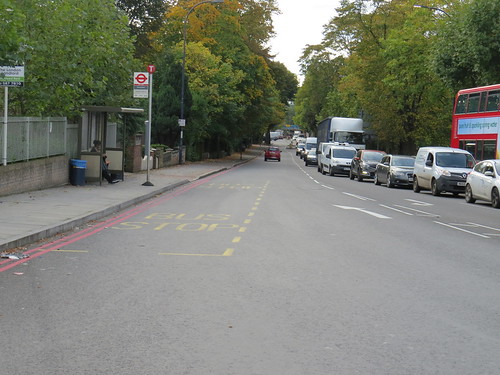 I had not realised exactly where I was and now I do.

The South Circular Road is the sorry result of successive governments, national and local, failing to face up to the reality that there is no proper orbital route in South London. It now seems inconceivable that the road will be improved in any meaningful way and so for most of the South Circular to the west of here it will remain a collection of streets strung together with signage.

Now at this cross roads do a right and then an immediate left, which will take you into Baring Road. Our next stop is a short way on the left. 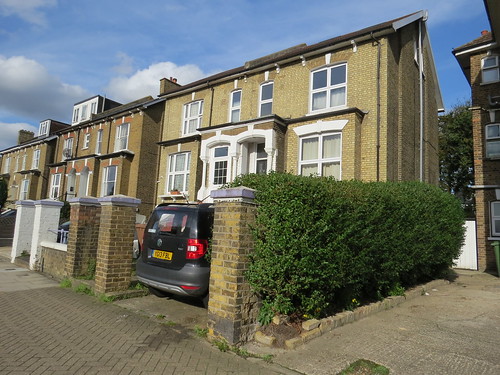 Number 39 was the birthplace of an actor called James Robertson Justice in 1907. Strange that because he is often thought of as being Scottish. Whilst he undoubtedly had Scottish connections, apparently he cultivated the myth that he was actually born in Scotland which he was not.

His parents named him James Norval Harald Justice.  According to his Wikipedia entry he seems to have lead a colourful life before becoming an actor. He was a journalist at Reuters in 1927 alongside James Bond creator Ian Fleming. After a year he emigrated to Canada, where he worked as an insurance salesman, taught English at a boys’ school, became a lumberjack and mined for gold. He came back to Britain penniless, working his passage on a Dutch freighter washing dishes in the ship’s galley to pay his fare. In the 1930s he was involved in ice hockey and motor racing. He was a policeman for the League of Nations in Germany and fought on the republican side in the Spanish Civil War.  On return to Britain, he joined the Royal Naval Volunteer Reserve, but after sustaining an injury in 1943, he was pensioned off.

After the war, he became an actor and reinvented himself with stronger Scottish roots. He dropped his two middle names and replaced them with a new middle name Robertson because that was the tartan he wore.

He is perhaps best known for his roles in the “Doctor” series of films of which there were seven between 1954 and 1970. In six of these he played the role of fearsome surgeon, Sir Lancelot Spratt, but in one the 1955 Doctor at Sea, the action takes place on a ship and he played the part of Captain Hogg, the ship’s commander.

He had a small role in the 1968 film Chitty Chitty Bang Bang and soon after he suffered a severe stroke, which signalled the beginning of the end for his career.

Stop 11: the view from Baring Road

Now look back and rather unexpectedly you will see a great view of Canary Wharf. 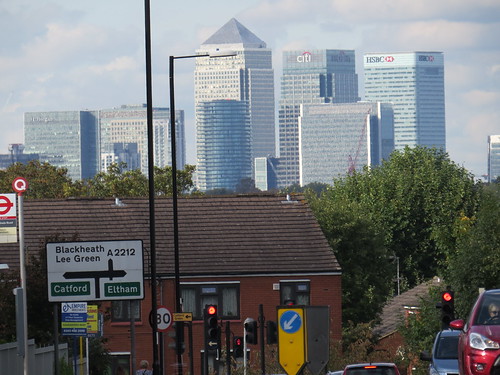 Obviously it does not quite look like this is real life, as I have zoomed the lens which makes the towers seem closer..

Just a little further along baring Road is Northbrook Park. According to Lewisham Council’s website this was a field known as the Ten-Acre Field, although in fact it was nearer nine acres. The field formed part of the Baring estates in Lee, and in 1898 Lord Northbrook offered to present it for public use, in commemoration of Queen Victoria’s Diamond Jubilee. A sundial marks Lord Northbrook’s gift.

And I guess that explains why the road here is called Baring Road.

We have now reached the end of our SE12 walk which I have to say has not been the most interesting area.

And I have left you a bit out of the way. Probably the best thing is to retrace your steps to Lee station, although there are local buses. There’s the 261 along Baring Road which goes north to Lee and Lewisham and south to Bromley and beyond. Otherwise from St Mildred’s Road (the South Circular) there is the 160 and 202 towards Catford and going the other way the 160 will take you to Eltham and beyond whilst the 202 goes to Lee and Blackheath.