Earls Court is an area which largely owes its existence to the District Railway which was spreading its tentacles westwards in the 1870s and 1880s rather than finishing off the Circle line in the City like it was supposed to do. It is an area dominated by vast cliff like buildings of 5 and 6 storeys; many were built as single houses and are now split up but others were purpose-built flats. During the 1960s it became known as the place for Australian and New Zealanders to stay. But today the area has gone up considerably in price and there are not too many run down properties of grim bedsits. But on the main drag. it still does feel for the most part a bit of a place to go through rather than to live.

As you look across the road from the Post Office, you will see a gated mews to the left of the station building. This is Old Manor Yard. This dates from the 1870s and is on the site of the Old Manor House of Earl’s Court. There was not really a village as such at Earl’s Court. Just a few buildings associated with the manor. Not much to see but basically this is was the original heart of Earl’s Court. 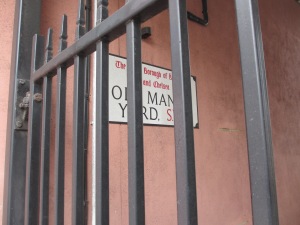 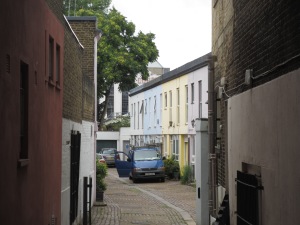 Now look at the facade of the station across the road 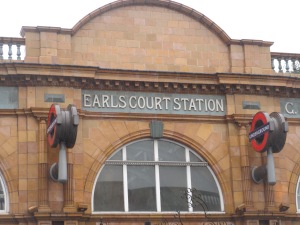 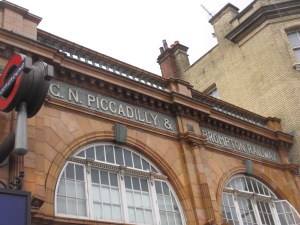 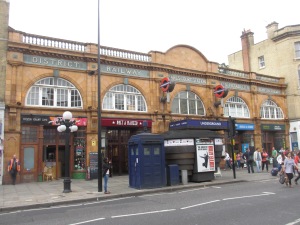 The facade we see today dates from 1906 and is unusual in that the GNP&BR normally had their own distinctive buildings at almost all their other stations – designed by Leslie Green, they were covered in deep red glazed tiles. But this did not happen here presumably because there was space was within the existing station shed to house the lifts to the lower level. Even though at the time this facade was built the two railways serving Earl’s Court were controlled by the same holding company (Underground Electric Railways Company of London Limited), the two individual railway names are set out on the station front.

The lift access was supplemented in 1911 by the Underground’s first escalators between the upper and lower levels. It is said there was a one-legged man named “Bumper Harris” travelling all day on the escalator to demonstrate its safety but no evidence of this has been found by the London Transport Museum.

Now you can hardly fail to notice the blue Police Phone Box by the newspaper stand outside the station. Cross over and have a closer look.

No this is not Doctor Who’s time machine  – the TARDIS. It is a modern day replica of the traditional police boxes that were once a common sight in the UK until the early 1970s when personal radios became possible. 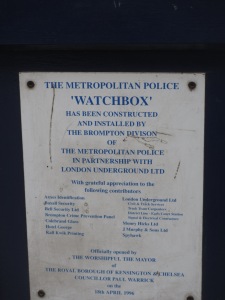 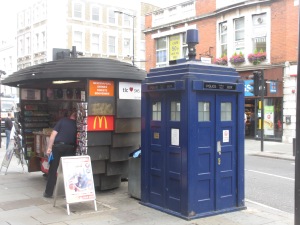 Unveiled in April, 1996, this box was to enable the public to contact local police at the touch of a button, There were plans to distribute similar boxes throughout London as hi-tech surveillance units, but this idea was later abandoned.

Cross back over Earl’s Court Road and turn left, ahead you will see a pub

This pub is named after a german Royal, Francis who was Prince of Teck from 1863 – 1871 then he became Duke of Teck. He married into the British Royal family but had to rely on his wife’s income and was often heavily in debt. His daughter, Mary married one of Queen Victoria’s grandsons who later became King George V. So basically this pub is named after one of the present Queen’s Great Grandfathers 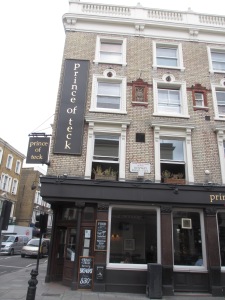 The small scale of the buildings in this street comes as a bit of a surprise given the scale of most of the rest of Earl’s Court. The reason is that this is one of the oldest streets in the area, predating the coming of the railway. Architectural historian Pevsner dates the pretty two storey terrace from numbers 15 – 33 as being 1819 – 1825. Further down the road (35 – 71) the houses are even older, dated to 1807. 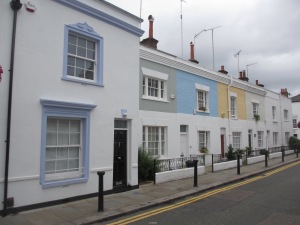 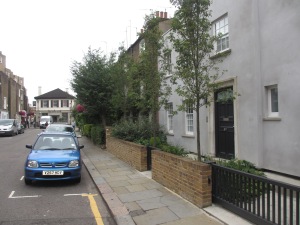 Continue down Kenway Road and into the short pedestrianised section. At the end turn left into Cromwell Road.

The second house along is number 173 where the composer Benjamin Britten lived between 1931 and 1933. I guess the road was a lot quieter then! 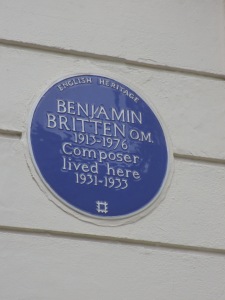 Retrace your steps and keeping walking down Cromwell Road until you reach number 153. This is where the film director, Alfred Hitchcock lived from 1926 – 1939. So for a couple of years in the 1930s, Alfred Hitchcock and Benjamin Britten lived a few doors away from each other. I wonder if they ever met. By the way look at how the ivy is satisfyingly creeping around Hitchcock’s blue plaque. Now that cannot have been an accident! 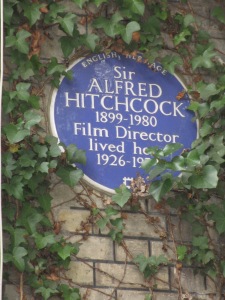 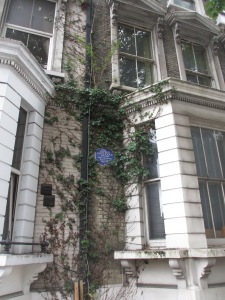 Turn back and go along Cromwell Road until Knaresborough Place where you turn left. Go straight ahead following the road as it veers slightly to the left. Continue until you reach Courtfield Gardens

Earl’s Court was largely developed in a period of twenty years (1870s and 1880s) but in the middle of this period the fashion changed from classical, with the use of stucco to red brick and terra cotta with “Queen Anne” or “Jacobean” motifs. You can see it vividly here in the contrast between Courtfield Gardens built in the 1870s and the next stop, Collingham Gardens built in the 1880s. 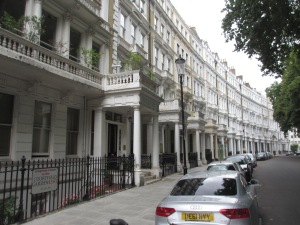 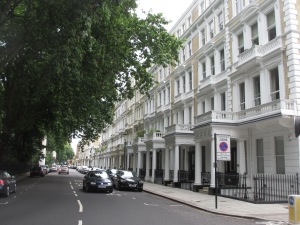 Collingham Gardens together with the neighbouring Harrington Gardens was a mixture of private commission and speculative buildings by the architectural partnership Ernest George and Harold Peto. It is quite a dramatic change of style.

One famous resident was Howard Carter, of Tutankhamun fame who lived at Number 19. 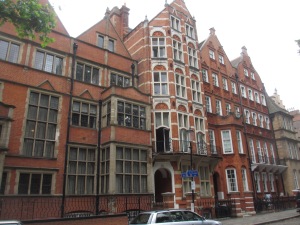 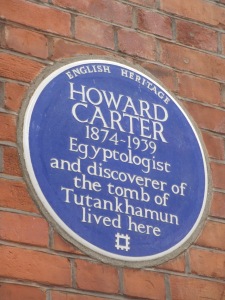 Keep walking to the end where you will get to Number 9 whose entrance is actually round the corner. Number 9 is noticeably smaller than the others and it turns out this was originally occupied by Peto.

Stop 8: The streets with two names

The street names round here are incredibly confusing as a number of the buildings are clustered private gardens and take their names from the gardens, so here we have just seen Number 9 Collingham Gardens but across the road the buildings are all in Bolton Gardens. So if you turn back on yourself and cross the street you have just come down, the buildings on your right are numbered in Bramham Gardens and the ones on your left continue to be numbered in Bolton Gardens. Confusing huh? 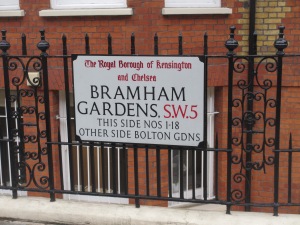 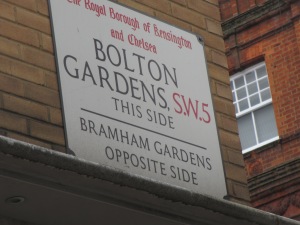 Keep on walking down Bramham/Bolton Gardens until the end. Turn left into Earl’s Court Road and at the lights turn left into Old Brompton Road. Almost straight ahead across the road is out next stop.

Coleherne Court is a sprawling complex of flats with its own private garden out back. It dates from 1901 – 1904. Pevsner describes it as a “cheerful mix of Tudor and Georgian motifs”. 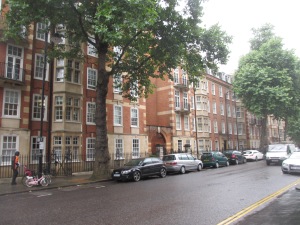 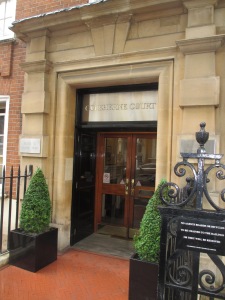 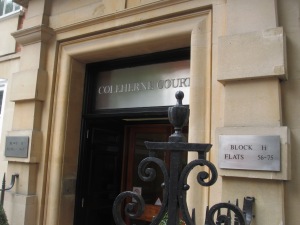 The flats’ most famous resident has to be Diana, Princess of Wales (1961–1997), the first wife of Prince Charles. She lived at 60 Coleherne Court from 1979 to 1981. Her parents bought her the 3-bedroom flat for £50,000 as an 18th birthday present. Diana lived there with flat mates until February 1981 when she moved into Clarence House, the Queen Mother’s residence, on the night before her engagement to Prince Charles was officially announced.  She reportedly said it was here where she spent the happiest time of her life.

You can get a tantalising glimpse of the private gardens through the gate. 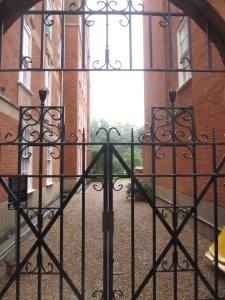 Retrace your steps along Old Brompton Road crossing over Earl’s Court Road. Keep walking until just past the corner of Coleherne Road

The Troubadour at  in Earls Court, established in 1954, is one of the last remaining coffee houses of its era in London. It has a club room in the cellar famous as a venue of the British folk revival in the late 1950s and 1960s. 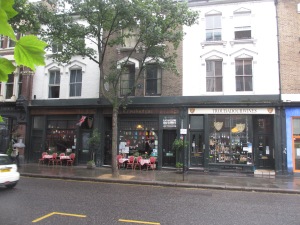 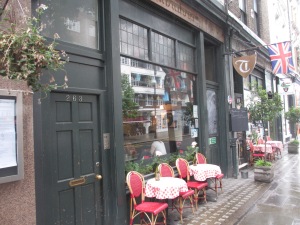 When the unknown Bob Dylan arrived in Britain for the first time, it is sometimes said that his only guide was a piece of paper from his mentor Pete Seeger bearing the words, “Troubadour Folk Club, London, ask for Anthea”. He first performed in London here in December 1962 apparently under the name Blind Boy Grunt

Morrisey played here in February 2012. I wonder if he sang his ode to male prostitution “Piccadilly Palare”. Morrisey anoraks will have noted our title today is a quote from this song. At the time this song (late 1980s) was written Earl’s Court had a number of gay bars and clubs but I do not believe any are still operating today. And here’s a bit of Morrisey trivia, you can hear the voice of Suggs from Madness on this track.

Continue walking along Old Brompton Road and turn right at lights into Warwick Road. Cross over at crossing and take the second turning on the left.

A few doors down on the right hand side of this street is number 67 which was home to the comedian and actor, Hattie Jacques for 35 years 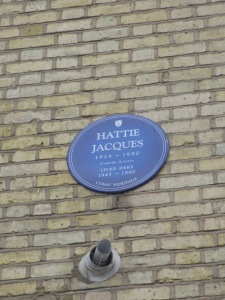 Hattie was not her real first name which was Josephine. She made her theatrical debut aged 20 at the Player’s Theatre and during her time there she appeared “blacked up” in a minstrel show called Coal Black Mammies for Dixie. She was likened to the American actress Hattie McDaniel (of Gone with the Wind fame) and the name “Hattie” stuck.

She had a life long partnership with comic actor and writer Eric Sykes and was in a number of Carry on films. She was a great friend of Kenneth Williams and is mentioned a number of times in his diaries. She loved hosting parties and he mentions he saw 1957 in there and also went to a Christmas Day party in 1972. He was invited to her 1973/74 New Year’s party but declined. He went nowhere that year – and says in his diary “If I attend one more party I shall go stark raving mad”.

Retrace your steps to Warwick Road and turn left. until your reach the entrance to the Exhibition Centre. 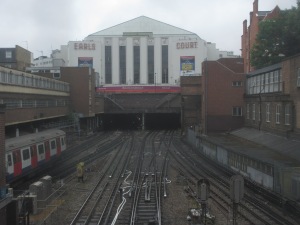 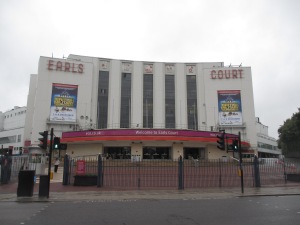 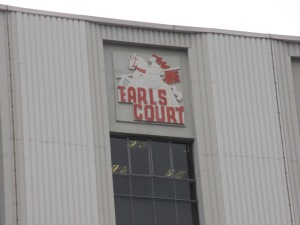 This was London first permanent centre for commercial exhibitions built in 1936/37. The orginal hall was built over the District line with a new entrance to Earl’s Court tube station constructed to facilitate easy access to the Exhibition Centre. There was a direct entrance from the underground passage which connects the District and Piccadilly lines. This was however closed in the 1990s at around the time the capacity of the Exhibition Centre was expanded by the construction of a second exhibition hall, Earls Court 2, which was opened by Princess Diana, who as we have heard was herself a former Earls Court resident.

This vied with Olympia up the road to stage all the big trade shows and exhbitions. It also doubled up as a concert venue. However the world has moved on and we now have the larger much more modern facilities such at the NEC near Birmingham and ExCel in Docklands. So Earl’s Court’s days as an exhibition centre and concert venue are numbered. Mayor Boris Johnson has recently agreed plans to demolish the whole complex, plus a bit more and to build what is virtually a whole new neighbourhood. It’s a shame to see the old place go but I guess it is just inevitable.

So we have seen how Earl’s Court developed mainly in the 1870s and 1880s following the coming of the Underground. Most buildings are huge cliff like 5 and 6 storey structures and we can see how the building fashions changed from classical stucco to red brick and terra cotta around 1880.  But there are a few buildings from earlier in the 19th century which are on a smaller more intimate scale. Earl’s Court has been home to many famous people over the years from Benjamin Britten and Alfred Hitchcock in the 1930s through Hattie Jacques for 35 years to 1980 and Princess Diana for a couple of years (1979 – 1981). And for now at least we have two concert venues of very different kinds, the intimate Troubadour and the vast Earl’s Court.